In your mind draw a line running north between Wisemans Ferry and Cessnock in the Hunter Valley.  Do you know what lies in the 70km stretch between these two towns?  Only recently we began to explore and understand this vast stretch of wilderness that is centred around Yengo National Park.  Yengo National Park is a massive 154000 hectares and is part of the UNESCO World Heritage Listed Blue Mountains.  It's neighbours include the impressive Wollemi National Park to the west and to the south Dharug National Park.  It's an area that got hit hard in the 2019/2020 bushfires but it is recovering slowly.  It's not visited by many people as it takes commitment to get there, very few facilities and only a handful of tracks.  But this makes the place special and for those that take time to explore there are rewards waiting.

Yengo is an incredibly important place for Aboriginal people.   The Aboriginal nations connected to this area are Awabakal, Darkinjung, Darug, Gumalroi, Guringai, Wonnarua and Worimi groups.   There are many traditional Aboriginal tracks through the area.  The most well-known are the Boree and Bulga tracks which provided trading routes between the present day Hawkesbury and Hunter Rivers.   The Yengo area is rich in engravings, ceremonial sites and spiritual stories.  These sites provide insight into traditions, past life styles, folklore and interactions with the environment.  Sadly with the disruption of Aboriginal culture following European settlement and conflicts the meaning of many sites has been fragmented or lost.  Today local Aboriginal groups and the NPWS actively manage the sites and what information is known is passed down to younger generations. 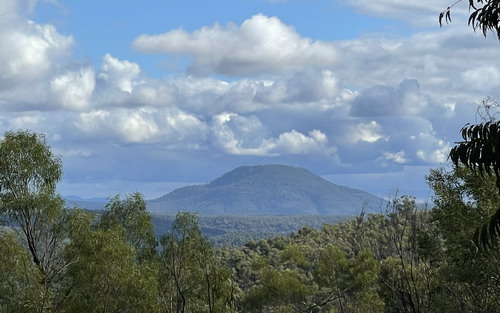 Mount Yengo dominates the park - rising 668 metres its formidable shape can be seen from many vantage points.  For Aboriginal people  Mt Yengo is believed to be the site where the spirit Baimie departed into the sky after he finished his  creation tasks.  Many of the art sites found in the park are connected to this belief of creation.

One of the caves near Mt Yengo suggest occupation dating back to 6000 years BP and some of the rock engravings nearby are over 2000 years old.  Mt Yengo certainly has a strong presence and is easily recognised from many distant vantage points.

A Daytrip off the Beaten Track

Our objective was to explore the aboriginal area around Finchley Cultural Walk which is west of the tiny village of Laguna. Our trip to Yengo started early  - allow a full day to do this trip and fill up your car before heading off.  Take supplies too and avoid doing this in bushfire season or after heavy rain.  It's a long route, with lots of windy dirt road and many parts have no mobile reception.  A 4WD is handy but not essential - it's best to check the National Parks website for park and road closures before you set out and to download a basic map of the area.  Don't rely on Google maps  - we found coverage non-existent as you enter the park from Laguna.

Leaving Wisemans Ferry we crossed the Hawkesbury River by ferry passing through the tiny village of St Albans.  After St Albans  the road turned to dirt as it headed towards Bucketty.  The road follows the thickly forested valley heading north to the headwaters of Mogo Creek - take time to stop at the signposted Mogo Creek Camping Area near Circuit Flat Bridge for a break or toilet stop.  Near Mogo Creek the road followed the convict constructed Old Great North Road.  There are signposted sites off the side of the road to learn about the history of this failed and expensive road venture route north. If you are interested we've done a Trending article on how best to experience the  Great North Road. 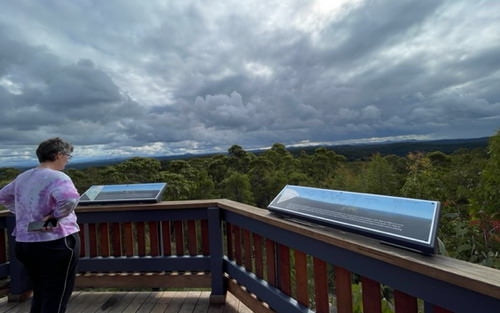 Eventually we reached an intersection where we turned left onto a bitumen road that leads to Laguna, Wollombi and eventually Cessnock.   This road is the suggested return route back to the M1 near Gosford.  As we headed north rural properties and farms appeared but the isolation of the bush was always there.  About 3km before Laguna keep an eye out for the signposted  Yengo Creek Road on the left.  Turn here onto the dirt - it's not that obvious initially but the road heads west for a few kilometres, crossing a creek before some basic signposts kick-in to 'Finchley Track'.

Follow Finchley Track as it climbs up a steep ridge, flattens out and narrows.  It's about 14km from the main road to the first point of interest Finchley Trig.  Finchley Trig is a 'wow' moment  - sitting high above the surrounding trees, interpretative boards help orientate you with the peaks of the park and it's Aboriginal importance. 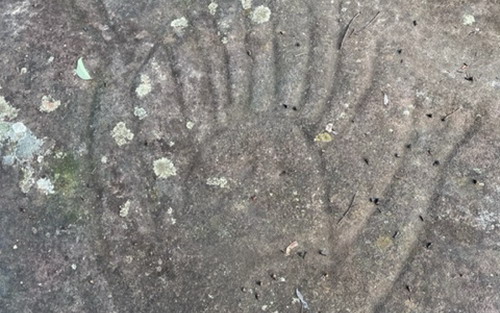 Returning to the car we followed the signposts to Finchley Cultural Walk 1.2km away. This short, easy walk with interpretive boards reveals an astonishing wealth of ancient Aboriginal rock engravings.  As we approach the rock platform our eyes are drawn to the markings on the rock - take your time as the longer you are there the more you'll see.  The engravings slowly reveal their true nature  - what ceremonies took place here, what stories were told - you can sense the significance of the place - Mt Yengo sits on the other side of the valley always in view.

The engravings depict a series of ancestral beings holding clubs and weapons.  Keep your eye out for the engraving depicting an emu woman plus tracks of animals carved into the stone depicting hunting.  As we leave we see a set of Aboriginal clap sticks leaning up against a tree suggesting the site is still used frequently for ceremonies by the local first nations people.

Returning to our car we retrace the journey back to the main road.  After seeing so much we were keen to have a break and talk about what we had experienced.  We can highly recommend a short side trip to the Laguna to the Great Northern Trading Post store up the road to the left.  A fabulous, rustic style cafe and bar which sells cakes, snacks and drinks.  You can even buy the local cider, beer or wine to take home to try.  By now it's time to head back so we keep to the sealed road heading back to the M1 via Central Mangrove.  You could easily extend this drive by exploring the village of Wollombi and have a stay over in the Hunter Valley.

A number of Aboriginal operators run tours in Yengo National Park.  If you want to understand more fully the stories and cultural importance of the area to the first nation people it would be great to check these out.