Uncover the 5 best historic pubs in the Hawkesbury

It is often said that history is made in pubs and in the Hawkesbury that sentiment reigns true. Many of our Hawkesbury local establishments have histories dating back well over 200 years. If the walls could talk our pubs would speak to us of everything from garrisoning red coat soldiers, tragic accidents, the home life of many of our local icons and speculation of resident spirits that still wander the cellars of the venue. The buildings themselves are also important pieces of history, representing styles of architecture and telling stories of the people who constructed them and the materials used to do it.  So if it’s history that interests you or if you are simply craving for a schooner of lemon, lime & bitters and an epic chicken schnitzel, read on! 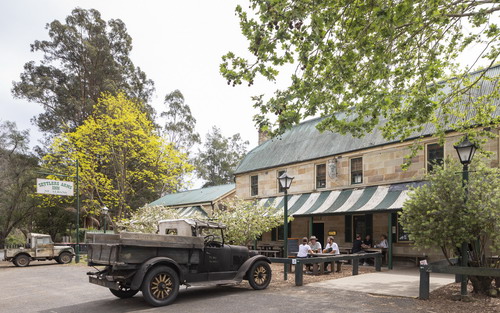 One of the most iconic pubs in the Hawkesbury region is the Settlers Arms Inn at St Albans. About 30 minutes north of Wisemans Ferry, the drive to St Albans is one of the prettiest drives in the area passing through the wilderness of what locals call “the Forgotten Valley”.  The Inn itself, established in 1836 is constructed from convict cleaved sandstone, each and every rock showing the unique scars of the manually intensive processes of splitting, cutting and shaping the local rock.  Used as a Cob and Co stagecoach stopover in the 19th Century, the Inn is now open Wednesday – to Sunday (call ahead or check their Facebook page for changes and special events) making it a popular spot for visitors by passing Sydney and day trippers. Overnight accommodation is available for those inclined to stay longer and explore the area. The expansive shady yard provides a laid back dining area for patrons and often hosts live music on weekends. 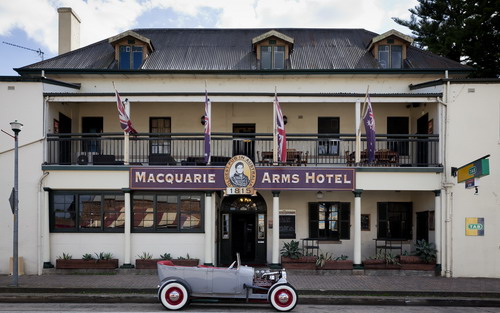 The Macquarie Arms Hotel in Windsor is the oldest hotel building in Australia, Originally built in 1815, this great old pub also constructed with local convict hewn sandstone claims the title of “Oldest Pub in Australia”. Like many historic buildings, there’s plenty of whisperings and sense of the ghosts of two brothers that died in a chemical explosion on site while distilling spirits. When visiting make sure you seek out the plaque on the garden wall facing Thompson Square which indicates the height of the Great Flood of 1867, when the river reached 19.3 metres.

Compare the tree in the picture on our Windsor heritage highlights booklet, it’s certainly grown a little since then! Open 7 days, patrons can enjoy the indoor and outdoor areas or opt to watch the world go by from the second storey balconies.  Call in for a quiet drink or a classic pub meal. While you are in the area, call into the Hawkesbury Regional Museum which is just around the corner to find out more about the past of The Hawkesbury. Admission is free, open 10am to 4pm, 6 days (Closed Tuesday).

Right in the centre of town at the intersection of Windsor and East Market Streets, ‘The Royal’ at Richmond is another well-known historic watering hole and has held a continuous licence since 1865. The land was granted to build an Inn as part of the Macquarie Towns development in 1811, however the land remained undeveloped for some time, the building was not completed until 1848. The structure, one of the oldest in Richmond still standing, remained original until 1957 when substantial renovations modernised the building. Now in 2020, under new ownership the hotel has undergone a major transformation. The first stage completed in September boasted a new front bar area, a VIP space and a sunny courtyard beer garden. With major works complete, and charm retained it is definitely worth calling in check out the makeover of this honoured ‘local’. Open 7 days with all day dining from 11am until late, the new menu will evolve and celebrate local Hawkesbury produce.

The Wisemans Inn Hotel began it is life as Cobham Hall originally a residential house built in 1826 by convict labourers as a home for Solomon Wiseman, the convict ,merchant and enterprising ferryman who the township Wiseman’s Ferry is named after. Most of the original building is still intact today is constructed of…yep you guessed it, hand-hewn Hawkesbury sandstone. Unique and interesting features of the building are the red gum rafters that can be still seen throughout the roof and the crushed, oyster shells in the mortar of the walls. The Hotel is open 7 days with a family friendly bistro and large open air deck making it a popular destination any day of the week, or pit stop for those out exploring the Hawkesbury River, Wisemans Ferry and beyond. The deck has lovely scenic views and there is plenty of space for the kids to entertain themselves in ‘the backyard’.

The Bird in Hand Inn at Pitt Town (also known as The Maid of Australia for a time) was established to create a supplementary income source a farmer, Daniel Smallwood in 1825. This was a common trend of many resourceful farmers and merchants in the era. The Inn started out on a block of land opposite its current location, but was relocated. Now a landmark right in the centre of town, the existing heritage listed building was built sometime in the 1840’s. It operated as an Inn until the late 1890’s and then became Pitt Town’s General Store for some years. The building was restored in 1986, and reopened as an Inn with its original name. Open from 7 days from 10.30am until late, the pub is renowned for its friendly country atmosphere, generous traditional pub style meals, including a raved about chicken schnitzel.

If you want to immerse yourself in the European History of the area we have a number of resources to help you explore including driving and walking trails.

If it’s more the establishments, great food and drink options and live music you are in search of, check out our full list of Hawkesbury pubs.