Nestled on a rural corner of the Hawkesbury River is one of the area's most iconic heritage landmarks Ebenezer Church.  This tiny little building is Australia's oldest continuously used Church.

Getting out of your car you really feel like you have stepped back to 1809 when the church was established.  When you arrive at the entrance to the church grounds, you'll see a small plaque.  Unveiled in June 2008, the church’s two hundredth anniversary year, the plaque is a reminder that this is Dharug land. This stretch of the river extending through Sackville is particularly significant for the Dharug people.  The river is known to the local people as the Dyarubbin and has been a significant place for millenia.

The origins of Ebenezer Church can be traced to the arrival in the colony of eight families on board the ‘Coromandel’ in June 1802. These families Davison, Hall, Howe, Johnston, Johnstone, Mein, Stubbs and Turnbull – requested to be settled together. Their wish was granted by Governor King and they moved to their 100-acre land grants at Ebenezer in 1803.

They were joined by seven other families – Arndell, Bushell, Grono, Cavanough, Jacklin, Suddis and Jones – and met regularly on Sundays for services on Ebenezer Mount or in the homes of settlers. These settlers were from various denominations but they came together as one congregation. In 1808 at a special meeting each family pledged to building a church and school. The total cost of £400 was  generated from voluntary subscriptions. There was no assistance - either finanical or through convict labour from the government.

Owen Cavanough donated four acres of land on which to build the church. Andrew Johnston designed the church and supervised its construction which took in total 6 years. George Hall swam his bullocks across the river to haul the sandstone to the site from Pitt town. The little church built of locally obtained materials – sandstone, cedar wood and hardwood -was a true community project. 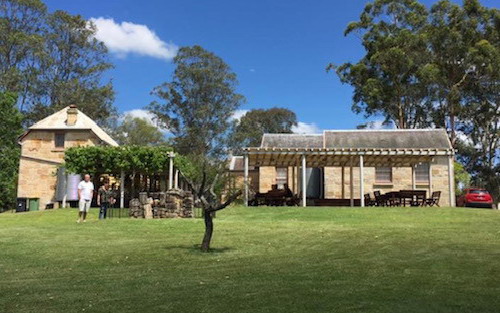 Over the years, the church has undergone renovations, extension and the addition of several buildings. One additional building was the near-by Schoolmaster’s House built around 1817.  Head inside to explore this tiny two storey sandstone building which was used as a classroom and residence for the teacher.   This is now a small museum run by knowledgeable volunteers.
As you walk around the Church you may not realise how close you are to the Hawkesbury River.  Back in the 1800's many of the parishioners would come to church by rowboat.  And it's hard to believe that in 1867 the Church was flooded  and all the cemetery records of burials were destroyed.  The early pioneers experienced not one but two 14m floods in 1805, and three more floods in 1956.  Floods since have never came into the Church  but they have impacted the grounds. 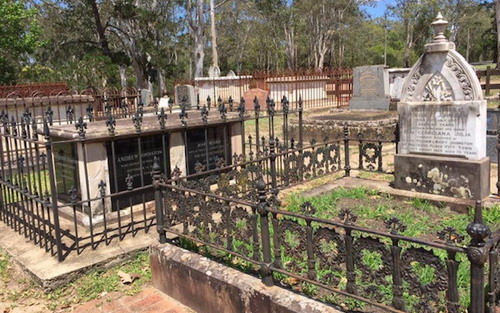 The cemetery in the churchyard is recognised as historically significant and one of the most important burial sites in Australia. If you've got the time walk around and read the inscriptions reflecting on the early settlers lives including the founders of the church.
Before you head off located opposite the Church you'll see what is left of an old tree.  It's across the road in a fenced off part of a paddock.  This is where the first service was held and a plaque provides more information. A severe wind storm in 2005 caused considerable damage to the main trunk of this historic tree but it still lives today.

Getting there:  Ebenezer Church is at 95 Coromandel Road, Ebenezer.  It's about a 15 minute drive from Windsor via King Road, Wilberforce.  There is no public transport to the church.

The Church is open every day and there is a self guided  pamphlet available from the porch leading inside.

The Schoolmasters building and shop is open Wednesday to Sunday 10am to 3pm (check their website as some public holidays they are shut) . Visitors can enjoy devonshire teas/coffees under the grape covered pergolas overlooking the Hawkesbury River.  Group lunches are available with pre bookings.

All are welcome on Sunday's at 8.30am for the regular Presbyterian service inside the church.

If you have a group or coach group please phone before arriving on (02) 4579 9235 or email to info@ebenezerchurch.org.au

For more information on the church visit www.ebenezerchurch.org.au