If these campus walls could talk 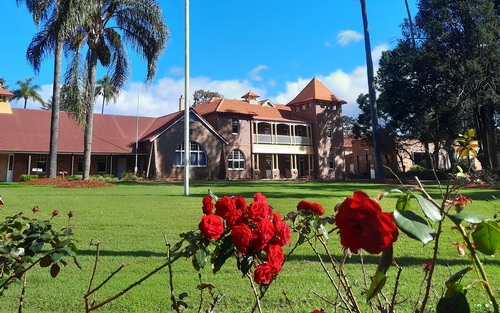 2021 marks the 130th year of the Western Sydney University Campus as a centre for education and learning. Starting its humble beginnings as Hawkesbury Agricultural College (HAC) in 1891 the campus now the Hawkesbury Campus of Western Sydney University shows its fascinating architectural and traditional beginnings. The combination of history and modern features makes a visit worthwhile. Keep in mind that the campus can be quite busy during term and be relatively isolated outside of term and on weekends.

The self-guided tour covers a 1.5km loop, and will take up to an hour and a half depending on stops and how much exploring you do along the way. Start from Fairy Circle. You’ll see campus maps as you move around the site, or you can print one from here.

If on foot/using Public Transport: alight at East Richmond Station, turning left as you leave the station and proceed along Bourke Street, and across Richmond Road.  Use the main entry gate and follow the path to arrive at The Fairy Circle start point. It is approximately 1.5kms from the station to the tour start point.

Enter the University campus using the Bourke street Entrance and follow College Drive until you see the parking area near Fairy Circle. This is open 5am to 8pm weekdays, 8am to 5pm Saturdays and closed Sundays. Should you wish to enter the campus on Sunday you can use the Londonderry Road access along head along Vines Drive, left onto Resources Road, left onto Science Road and right onto Castle Road where a right turn onto College Drive will bring you to Fairy Circle. 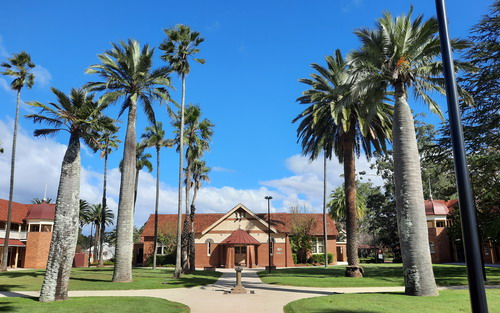 Fairy Circle and the R-Buildings in the quadrangle

Construction of the initial buildings on campus commenced in 1895 and by 1907 ‘the Quadrangle’ the series of buildings in traditional Queen Anne style located at the top of College Drive was completed. Interestingly there was a world-wide competition for the architectural design of the buildings and although still striking and reminiscent of the winning entries the full grandeur wasn’t quite reached when executed by the NSW Government architects who were hindered by budget constraints. The circle known as ‘Fairy Circle’ in front of the Quadrangle buildings creates a formal entry to the campus. Fairy Circle itself contains a rose garden, which is stunning when in bloom.  The Drive, Circle and Quadrangle were all listed in the National Estate Register of historic facilities. Don’t miss the sundial in the middle of the Quadrangle. 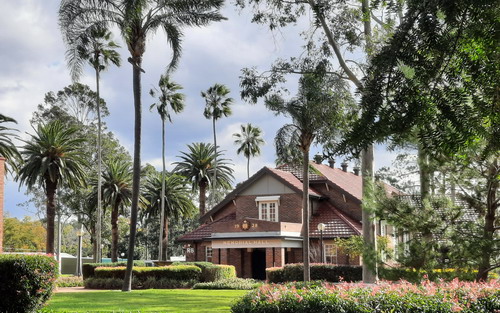 In this area and throughout the campus you’ll see tall palm trees featured in the landscaping. It is thought that William Guilfoyle who was then a director of the Melbourne botanical gardens gave advice on the layout of the grounds and possibly assisted in sourcing these trees. Principal H.W. Potts who was in service from 1902 to 1920 was a lover of trees known for his size, big ideas and vast courage. It can be assumed that this love of trees contributed to the mature feature trees that can still be seen on site today.

Other ‘R’ buildings outside the Quadrangle are the Memorial Library and Hall. The Hall was built in 1928 and was built with a combination of funds raised for soldiers fighting in WWI and additional funds raised by the Old Boys' Union (a group made up of past students). In 1943 the council of Old Boys decided to establish a Library near the hall as a memorial to those students and past students who served during World War II. The Library opened in May 1954 and there is a plaque at the building entry.  A true feature of the original library was 15 stained glass windows, designed by R.L. Johnson representing college values of citizenship, loyalty, service. One of the original windows can still be seen on the building, others able to be relocated and repaired were moved to the current Library. 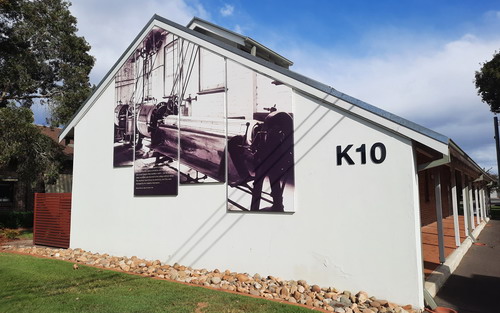 Proceed to the P Zone – Yarramundi House, Chapel and Laundry

From the quadrangle proceed along to Yarramundi Road and on the wide side of the bend is Yarramundi House. The heritage listed house was originally built as the residence of the Agricultural College principal. The building and gardens are excellent examples of early 1900’s design and landscaping.

Just a little further along on the opposite side of the road you will see and old Church building, with a significant story. This particular building started its life as St. Paul's Anglican Church Agnes Banks (c.1893) and was set to be demolished.  The building was relocated to the Hawkesbury campus in 1991 as the ‘Owen Carter Memorial Chapel’ (to commemorate long-serving Hawkesbury Deputy Owen Carter).

Rather than making your way through the car park, walk back toward the R buildings continuing around the bend of Yarramundi Road and pass through the K buildings heading toward Stable Square. K10 was an industrial laundry run by students, then became an office building. 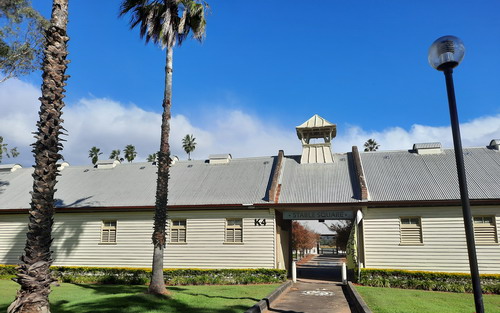 Proceed into the K zone, past the Blacksmiths Shop where students would have learnt the trade, shod horses and metal works such as fitting iron tyres to farm wagons (K5) and into Stable Square (K4).

The necessary practical buildings including Stable Square (completed 1895) were originally constructed to house draught horses and machinery and a base site for all practical work. Horses were retired in 1964, much of the animal power replaced by tractors and farm machinery. The Square is a timber construction and although it was completed in 1895 it suffered serious damage in a major fire that occurred on “Black Monday” a hot (44C) day in April 1896, after the region had already experienced a particularly hot summer. At least two thirds of the Square was destroyed by the fire. The Square was rebuilt by the College Foreman carpenter, Mr. A. Brooks, largely using student labour.

While the stables are no longer used for horses the building provides a range of services for students and a café and other facilities, though the horse troughs still remain. Make sure you check out and compare the old photos at two of the four of the squares entrances they give a good comparison of past and present.

Proceed out the opposite side of Stable Square along Second Avenue, past the oval and cross resources road into… 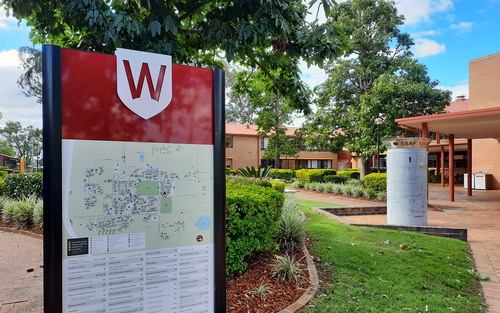 The Library area holds many the newer buildings on Campus dating from the late 1970’s including the Library G1. From the 1970’s onwards the academic profile of the campus widened with disciplines such as tourism and hospitality, nursing and general and applied sciences being progressively introduced. In 1989 the College then became part of the new University of Western Sydney, now known as Western Sydney University.

This is certainly a place that makes you wonder what they would say if they could talk. As you wander through this section you’ll find a tribute garden to students and faculty who passed too soon, and mesmerising mosaic style mural depicting the origins of the site. Around this section of the site you can see views of the rolling paddocks and old dairy, which still give the site that lovely rural feel. 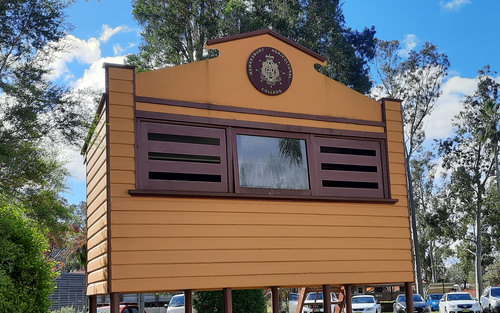 Proceed back on the other side of the oval along science road. To the left is the Campus oval.

Rugby Union has been an important part of the Campus history since the late 1890’s and is still played today on the main oval. The historic grandstand and the scoreboard, both painted in the Hawkesbury colours of blood and mustard are certainly worth a closer look. If you are lucky you might even see the players in action some Saturdays during the season. HAC for the WIN!

Proceed along science road to return to Fairy Circle.

If you are interested in knowing more the Hawkesbury Library’s local history section has multiple resources including pictorial histories of the college or check out the Uni’s archives here.