Windsor is the 'sweetest' place to visit!

“I’m bored”… the saying hated by parents everywhere that resurfaces each school holidays. 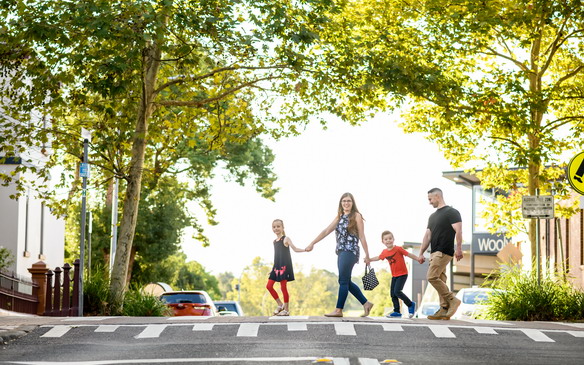 In the wake of our family watching the child centric movie “Yes Day”, I decided to give each of my children their own yes day this school holidays. Long story short, in this movie the parents have to agree to everything there children want to do for the day, with a few ground rules so things don’t get too out of hand. This ended up being more like a “yes afternoon” because hard line parent I am, they had to clean their rooms first. The first child to finish got today as their YES day.

Surprisingly enough, the initial demands of Miss 7 were relatively easily satisfied (and not surprisingly full of sugar). She wanted family day out with ice-cream for lunch, followed by a unicorn cupcake and fairy floss. So we headed toward Windsor, which I knew we could find those things and more.

Starting at Thompsons Square at the top end of Windsor the kids saw another family walking across the Windsor Bridge, and hadn’t realized they were allowed to walk on the bridge so off we went. 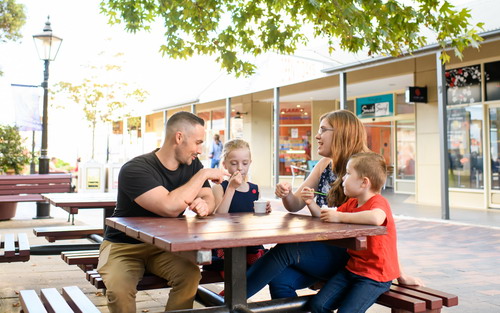 There’s viewing platforms on both sides of the river with some great interpretation in the square about the river and it’s long history. We spent some time reading the signs about the traditional peoples through to present day and the River and its highs and lows (literally). Even the children were quite interested to learn about the flood levels over time. The kids pointed out some birds swimming in the water and made crazy guesses about how high the bridge is (before actually finding out) and how many fish might be in the river. If you enjoy the interpretation throughout Thompson Square make sure you check out the UNCOVERED exhibition at the Hawkesbury Regional Museum, just around the corner in Baker Street. The exhibition includes all kinds of objects and subsequent stories discovered from the Hawkesbury River and in Thompson Square. It’s free to visit and open 6 days. We had only a brief look at the exhibition, before the ice-cream started to call, but I do plan to call back in at a later date to give it the time it needs.

We headed to Windsor Ice Cream Cafe and both the small fry ordered a scoop of rainbow. With the multitude of flavours on hand it always surprises me kids always pick the same flavour. Keep in mind Gelato 66 over the road has a large array of flavours to choose from too, another haunt of ours - however today called for ice-cream.

Wandering with ice-creams in hand and a coffee picked up on the way, we crossed the road into the mall and like magnets the

kids both dashed over to check how much money was in the paddle wheel water feature before begging for their own coins to throw in and make wishes of their own. Once $5.85 was counted up and 80c surrendered to the wish gods, we finished our ice-cream went in search of cupcakes. Gourmet Cupcakes and Donuts had a multitude of cupcake options, the initial unicorn request forgotten and overlooked for another masterpiece of sugary goodness topped with popcorn and another laden with chocolate icing. This place certainly knows what to do with sugar!

There were several other families out and about, enjoying the school holiday sunshine in the mall and the alfresco dining in the top end of town. There are some great dining options nearby or throughout the Mall including, but not limited to: The Bridge Café, Plan B, Second Home Café, The Crepe Escape, Simons Café, The Watchmakers Garage (new).

There are also some really great stores selling everything from clothing to homewares, floral arrangements and artworks, gifts and all kinds of treasures. We spent quite a while window shopping and wandering and even did some spending. This relaxed retail therapy reminded us of the Windsor Mall Markets. Held each Sunday the Mall is lined with market stalls from 9am to 3pm, we vowed to call in on a Sunday again soon. A great addition to the Mall area in recent years are the wall murals, the kids delighted in seeing them as we continued down the Mall. Some are so big you can’t miss them, but make sure keep your eyes peeled down the side streets and paths too. 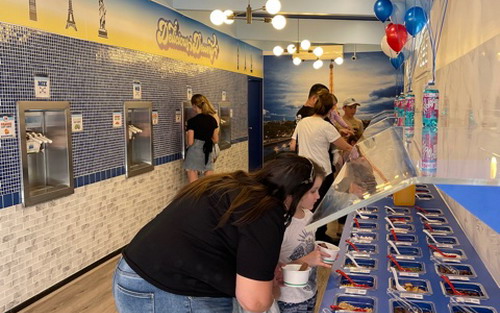 Still full with cupcakes the kids still marveled at the desert creations a couple seated outside at Delicious Desserts as we looked back up the Mall. With doe eyes, both looked at me “can we go to that place next time we come?”. Closer inspection and a conversation with a passing team member who knew our stunned questioning look all too well, revealed there was a room of ingredients laid out for customers to create their own deserts. I don’t think I’d ever seen so many options in one place! I was shocked we’d managed to miss this as we bee lined for cupcakes. So replied “Yes, of course” only after seeing they had a very reputable looking coffee machine. Seeing my line of thought my dear husband rolled his eyes but smiled smugly - he wanted to create his desert as desperately as the children did!

The Lollies N’ Stuff is just that - lollies, and lollies and lollies and stuff. The “stuff” covers ranges of sauces, cereals, and things like pop tarts that aren’t easily come by and some great handy must haves (I found some long sought after washable straws) and various gifts including custom name items. The requested fairy floss was located and as anticipated the selection of colors, flavors and sizes was astounding. With a bucket of pink and blue fairyfloss in hand, Miss 7 accompanied her brother to the register himself clutching a huge lollypop. Dad was not to be found initially, but soon surfaced red faced with a basket half full of ‘must haves’.

It wasn’t until we walked out of the store I realized both children while excited about their purchases, had no intention of actually 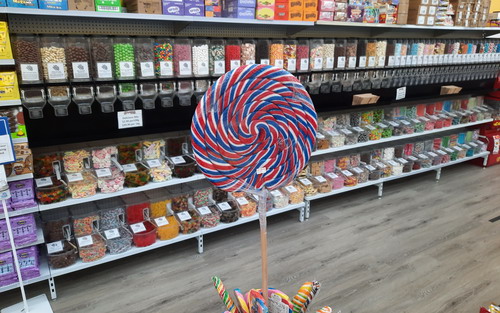 consuming them today, as full of sugar as they already were. By mutual agreement we decided to head to Governor Phillip Park for a play on the play equipment and used some of the recently consumed energy to play with a ball we had found in the car. We went for a walk down to the boat ramp and watched all the boats coming back in after a day out on the water. It had really been a nice day out.

Having thought our day was coming to an end as the sun began to sink the debate began between what to do next would it be: bowling, the Cinema or indoor amusement arcade and mini golf at Arcadia.

For more information and ideas on things to do during the school holidays keep an eye on the What’s On section and check out all the family friendly things to do on Discover the Hawkesbury.