For information or assistance  - call, email or message us on Facebook.
Discover the Hawkesbury

The firetrail curled around another corner - 'more up' I grumbled.  I guess going on a bushwalk to the summit of a mountain means uphill grunt.  At least it wasn't too hot for the 400 metre climb, the firetrail footing was solid and the walk back was going to be a breeze.

As I trudged up to a particularly steep section I saw two mountain bikes leaning up against a tree.  Further on I ran into a couple who had abandoned the bikes as the trail was too steep to ride. They decided that walking was going to be a lot easier. Why push your bikes up when it was even too steep to ride down! 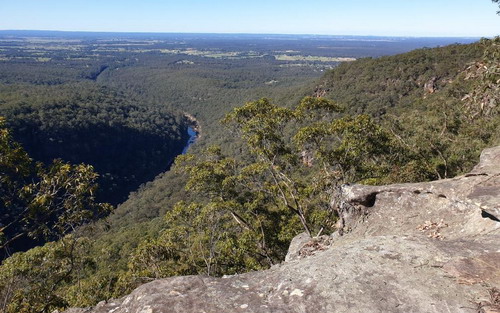 Don't let the steepness put you off. Grose Head South is an awesome mountain to climb.  At 458m above sea level it dominates the Hawkesbury landscape.

Looking west form the Hawkesbury River you'll see a distinct high lumpy mountain with sandstone cliffs on it's northern side.  This mountain stands like a sentinal indicating where the Grose River finishes its 54km journey through the wilderness maze of the Blue Mountains and joins the Nepean River to become the Hawkesbury.

Grose Head South is named after Lieutenant-General Francis Grose who governed the colony from 1792 until 1794. In his short term he established military rule, abolished civil courts and made generous land grants to his officers. Not exactly the most popular governor but that's another story. 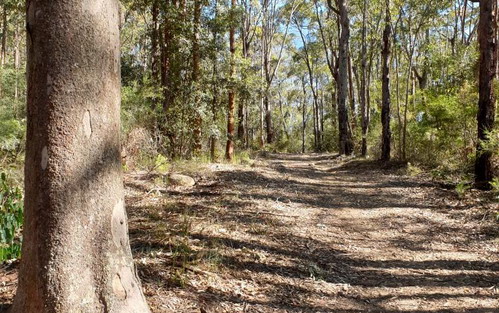 Difficulty: the walk uses a fire trail which is easy to follow once you get past the confusing start, there is a steady climb to the summit, there are no guard rails at any of the lookouts so its not suitable for young kids, take plenty of water.

1. Park your car at the end of Mountain Ave, Yarramundi. You'll see a locked gate where the road ends. No vehicles are allowed past this point but walkers can get through a narrow gap on the left.  Follow this road down a slight decline for about 100m and as you head up the small hill veer left along a fire trail (don't go right as it heads to private property).

2.You'll pass a locked gate with a sign for the YMCA Camp - head along this trail respecting the private property you pass through.

3.The trail initially is flat as it heads west.  Ignore any minor side trails coming in particularly on your left.

4.After one kilometre you'll get to a Blue Mountains National Park sign and a locked gate .  In this area there are a number of side tracks to the right giving great views to the Grose River Gorge.  It's worthwhile exploring the sandstone shelves around here for some wonderful views to the river.

5.The firetrail dips into a small saddle - enjoy the last bit of flat track as the climbing starts here and doesn't level out until you get to the summit 3km further on.

6.After 2km of climbing the trail opens up to a wider clearing with a magnificent rock shelf on the right.  This is the best lookout of the walk and the views are breathtaking.  You can see the Hawkesbury River, Richmond, Windsor, Kurrajong area and in the distance the tall towers of Parramatta and Sydney. Far below the Grose River can be seen in the narrow gorge heading east.  To the north and opposite try and spot the Vale of Avoca lookout in Grose Vale.

7.After having a break continue up the firetrail for another kilometre finally getting to the summit trig.  Although the trig is in the trees there are limited views west towards the Devils Wilderness and Faulconbridge Point if you investigate behind the trig. Take care around here as the cliffs do drop away quickly without warning.

8.Return the way you came.